A deviant mind with a penchant for kinky reads.

The Copper Horse: Pride by K.A. Merikan
My rating: 5 of 5 stars
Recommended to Kynthos-the-Archer by: ARC
Recommended for: All human-equine fans, especial those who wish for proper plot to go with their wank material.
Read from February 22 to March 30, 2015
Say yes to Uniporn! Freaking love the sweet surrender and the firm hand.
In comparison to the first book, Pride has upped the humiliation and degradation scale another notch, or rather several notches. Ahem.. that breeding scene was so intense I am melting alongside Copper in that stable under the watchful voyeuristic eyes of the ponies' masters. It's freaking hot! My ereader was smoking up my room. I was so aroused I wish for a pet of my own to go down on me while I watch that intense scene again and again. It could possibly be the highlight of the book really.
Copper is not an honest horse like he always claims to be. He is manipulative, cowardly, greedy and rather self-centered. Yet I couldn't help but to like him. His weak points makes him all the more real and interesting. He does have some likable traits as well and deep down inside he isn't a bad guy. He is just a regular underprivileged guy seeking for better things in life. Actually he is quite endearingly sweet in nature. Pleasing others seems to come naturally to him. Copper is a submissive down to the bones and a total happy bottom. An inborn mare instead of the stallion his master was grooming him to be. I think his hole would cheerfully suck any dicks as long as it makes his beloved master happy. That's how devoted and a good pet horse he is. He is a joy to be ridden and ridden hard would be his best reward for he is truly not fit to be the rider himself.
In Pride, Copper is no longer as self-conflicted as he was when he was first forced into the role of an animal, a mere pet to fulfill another man's dark desire. Copper has learned to appreciate his new lifestyle as a pampered pet and the biggest problem he has now is keeping his sexual disposition of a stud-loving horse a secret from the his master and the household. He fears of being thrown back to the derelict district where he had came from should his master finds out that he was being taken for a ride like a fool. Thing is, it is getting tougher hiding his secrets the more smitten he was by Eric his beautiful master. Would he be able to throw away the last shred of his protective layer in risk of losing his pride as a man? Discarding his remnant of humanity? Embracing his new identity makes him feels loved, alive and freer that without his shackles. It would make his beloved master very happy yet his pride would die along with Reuben the man he once was. Is Eric worthy his love? The Eric that has been and still could be cruel and harsh to him whenever things does not go his way. Still, Copper sees hope when he caught glimpses of Eric's tenderness. One thing for sure, Eric is very fond of his new pet horse and Copper has gained confidence that his precious head is not going to be displayed on the wall of that creepy dining room.
There are times when I felt that Copper is ready to wear a skirt and paint his nails in pretty rainbow colours. Yet I could not not like him. In a way his girlish side makes him all the more adorable even for a buffy guy like him. What I truly feel about Copper? Well I think he makes a damn fine pet horse. He's not going to be able to play stud horse for you but he is one that you'll love to cuddle with and watch him getting fucked hard by a studly stallion. Or you could just do it yourself and make him squeal for you. How delightful!
It is nice that this time around I could get to know Eric better rather than just watching him from a distance, puzzling over what makes him tick. I could feel Eric's loneliness and understands why he did what he did to fill that deep void left by his first stallion's premature departure and the sacrifices he had to make being a member of the ruthless Dal crime family. In a sense Eric is more fleshed out in Pride and that is good move or else he is just another face in the crowd.
While I must confess that there are certain parts that is rather baffling to me which mostly concerns Eric's action towards Copper. One involves his choice of atonement of the wrongs he did to his poor pet. The other I think best to save it since it is tough to avoid being a spoiler.
Overall, Pride is a bloody damn good human-equine erotica which also comes complete with engaging plots to get you glued to your ereader while you are vigorously beating the meat or polishing the pearl in frenzy. 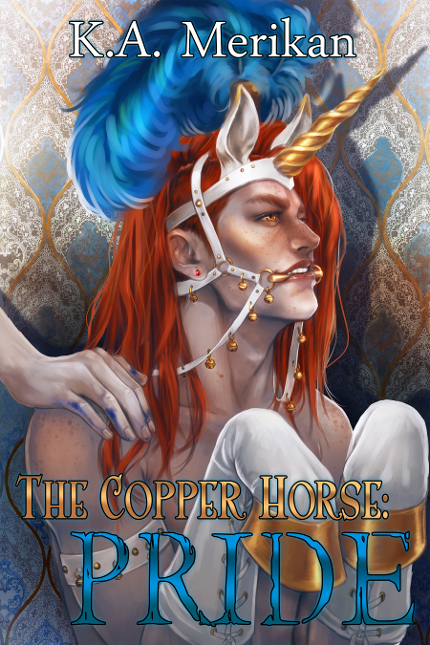 Feng Shen Ji The Legend and The Hero, Volume 1 by Deng Zhi Hui, Zheng Jian He